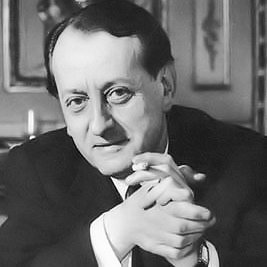 According to Roger Caillois, André Malraux was “a writer open towards the world as very few have ever been”. Born in Paris in 1901, he had a strong interest in Asia from a young age and travelled several times to Cambodia and Vietnam in the ‘20s and then to India and Japan.

His novels reflect his political commitment, starting with The Conquerors (1928), until Man’s Hope (1937). In the last of these works, The Walnut Trees of Altenburg (1948), he questions war, death, brotherhood, artistic creation, and the notion of “man”.

In 1944, Malraux fought notably in the Vosges Mountains and in Alsace, as the leader of the Alsace and Lorraine Brigade.

As a minister of General de Gaulle, first office assumed in 1945, he established in 1959 the Ministry of Cultural Affairs, which he ran until 1969. His Anti-Memoirs were published in 1967.

Passionate about shapes and their metamorphoses, Malraux had The Imaginary Museum published in 1947. Since that particular moment, he never ceased to wonder about artistic creation: about Goya in Saturn (1950); about the Sumerian, Indian, and Greek art in the three-volume The Metamorphosis of the Gods (1957-1976); about the Roman and Gothic arts, then about the 15th- and 16th-century Italian art; about Rembrandt, Manet and the modern art; about the Far Eastern art, African sculpture and the art of the mentally ill; about Picasso and the Imaginary Museum in The Obsidian Head (1974). His last inquiry was on literature and resulted in his very last book, called The Precarious Man and Literature (posthumous, in 1977).

Malraux passed away at the Henri-Mondor Hospital in Créteil, on November 23rd, 1976.

at the University Paris IV-Sorbonne